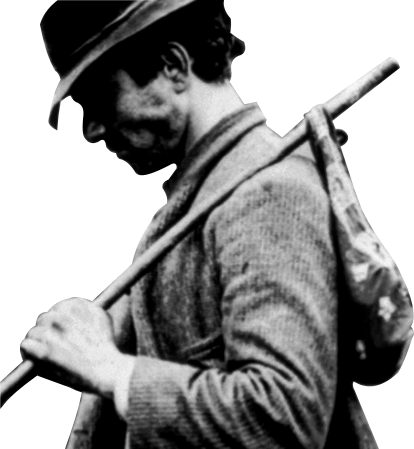 The farmer bent upon a chore, lifted up his head and looked about,

Removed his hat, wiped his brow upon his sleeve and lent upon his rake.

The sunlight low upon the earth glowed enough against approaching night

For him to see a distant shape moving near, enough for him to make

Quite clearly a man, arriving soon, beckoned and quickening his pace,

Stretched out his hand, raised up his face and smiling broadly, greeted the first

And though not known to he, with some familiarity and friendship,

Begged favour of the farmer for his long held hunger and for his thirst.

The farmer, portly but strong, with eyebrows thick and wide shining blue eyes

Was generous, kind and known to be too gentle and willing to give

Against the express orders and advice of the farmers wiser wife.

“Giving all you own and all you are and more is not a way to live,

My wife will argue, for that’s her want, but she’s kind enough and she means

Half of what she says and has poor understanding t’other half at best.

You look travelled well and worldly stranger and a man of many miles,

Let us keep the night waiting no longer and away for us to rest”.

From the farmer’s chore and gesturing to the ground, “there for the morrow”

“T’will have to wait for another day or for time that I might borrow”.

The two men travelled slowly and like brothers reunited through time,

Talked and laughing both reminisced of each others days and years and lives.

The farmer spoke of rain and floods and famines and favourite horses.

The stranger talked of far off distant lands and eternal cattle drives.

‘T’is the house?” the stranger asked as the two paused on a hill to behold

“Aye, t’is the house and the home and though there’s not much of mortar and brick

And for them that’s cold and thee that’s weary it shall surely do the trick.”

“It looks fine, much more than so” the stranger said. “No matter of its shape

Or what food fills the shelves. I will be but grateful evermore and know

And for time a ceiling waits above my head instead of falling snow.

“Come forward then stranger and friend and pass the threshold into my home,

There she sits my own true wife and doting daughters there about her feet.

The fire is ablaze and no doubt some culinary challenge, though warm,

Awaits on a plate and will warm and fill you with substance and with heat.

Mother tries hard on the tasks and harder on my wits, though she’s certain

None I have, she is a wife that I am to bare with some fortitude

She’s harsh in her words but I know beneath all, she lives with gratitude.”

No gesture to either man, then passed some time before again she spoke

If he asked, and so he would leave us poor and our hearts and spirits broke.”

“Ah! the Devil. The Devil? He would not visit us here for fear that

Poor Satan to despair. The Devil? He would send an emissary

Ahead to ensure you were no-where to be found when he did arrive.”

The men sat in the ring of light meagerly provided by the fire,

Daughters long to bed, mother hidden in another room worrying

Of storms, stock, unmended fences and not of life’s passions and desire.

Crouched, sitting here quietly, here in this room, here by the made up bed

Lest you rise from your sleep, sober or in stupor and murder us all

Leaving us frozen under our covers, found long after to be dead.”

No witness in the field would have seen and no reason found for the crime.

And then drowned them both together in the water we boiled for our tea,

Their poor young lifeless souls would be hidden in that darkness in the ground.

And then your wife, quickly, anxiously while calling on them to return

Would have found her way to me in her tragic despair, lost and grieving

To my waiting heavy hands around her neck, her last breaths receiving.

No farmer, there are chores aplenty without your murder on the list

And the rewards for those, though you call them humble, are for from meagre

For murder is a task this weary traveller is not so eager.”

To come and fill the house with an artifice of grief and of sorrow.

But listen to I now. Who am I to think that God might expect us?

Be sure my wife and children be blessed and by angels will be taken.

For I?  The Devil might arrive early and rejoice in my poor soul

As the Lord God leaves me, this old and poor cursing farmer forsaken.

“By and by I’ll inform my wife that you will permit her sleep in peace,

Not eternal peace, not murdered by you or lustfully vexed by I.

However, should your mind change and should you rise up, please kill first the Bride

And she can ready and prepare for me a place, a place by and by”.

“Mother, though the stranger describes it well, no axe awaits you tonight

Lest I raise it and strike you and rejoice for quiet eternity”.

One thought on “The traveller”